Where else to find Sean

I've written about the majors, the minors, the draft, etc. but never really about a current college player. When one of my friends came up to me and said I should post something about her friend, I sorta shrugged it off...that is, until I realized that he's a stud pitcher. 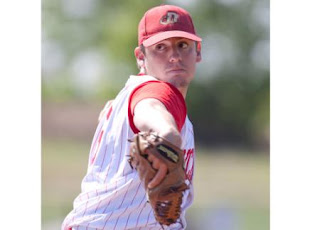 Meet Sean White, a rising senior lefty from Dickinson College in Carlisle, PA. He's thrown a 17 strikeout no-hitter as well as a 21 strikeout game (1 away from the NCAA Division III record). I had the pleasure of interviewing White, and am impressed at his willingness to discuss his college career in depth. I've spoken to former 1st rounder Matt Antonelli, later draft picks like Josh Laxer and Chris Curran and undrafted FA's like Mike Gallo before, but it was nice to get a new perspective from a pitcher in between his junior and senior seasons trying to embark on a long journey to the big leagues.

1) What pitches do you throw? (feel free to include speeds, describe the movement, etc.).
My three main pitches are a four-seam, curve, and changeup. I started to work on a cutter this summer as a potential fourth pitch, but havent used it in a game yet. My fastball by summers' end was 86-87 touching 89....hopefully (I'm) still growing in velocity. My curve-ball is my out pitch. I can use it as a get-me-over which acts more like a slurve, but I love throwing it hard to get some fans. My changeup I had lost my first couple years of college, but I got it back this spring and it has become a definite asset.

2) What baseball achievement or accolade are you most proud of at this point in your career?
The obvious answer is striking out 21 in a game earlier this spring, but truly it was my senior year of high school (The Salisbury School, in Salisbury, CT) when our team went 20-0 and I pitched our championship game.

3) What are your favorite professional sports teams or athletes?
Mets, Jets, Rangers....my family has had Jets season tickets my entire life so they have to be my absolute favorite. I've never really had favorite players on these teams to be honest. Typically players I've idolized have come from other teams.

4) Do you have any routines before starts (such as eating the same food before every game or painting your nails like Dmitri Young)?
The only specific routine I have had at school is that I eat half a PB & J before I pitch, but nothing out of the ordinary.

5) If you could face any one batter in their prime (past or present), who would it be?
I've never really thought about this, but I think it would be someone that I despise, which would give me greater incentive to get them out like a Chase Utley, but I've always wanted to pitch against a middle of a Major League Lineup just to see how I could do.

6) Fill in the blank: Without _______, I would not be a baseball player.
My family, we have always been a huge baseball family, unfortunately I am the only one who kept playing through high school. Mainly it should be my mom who was willing to give up her commitments and supportive to drive me to AAU and travel games far away.

7) What is your major? What do you envision doing after college?
My major is economics; it has always interested me the most, but after college I would live to try and further my baseball career. If that doesn't work out I wouldn't mind working for an organization at some level in the front office.

8) Have you had any contact with MLB scouts or anything to indicate you could be drafted or signed after next year's draft?
In March my coach was contacted by an agency based in Pennsylvania, but we never heard that much since. This past summer I pitched in the NYCBL where my coaches are affiliated with MLB clubs. Hopefully I impressed enough, and I think I did where they will continue their interest in me by passing along what they saw to area scouts. I anticipate to see some at my starts next spring.

9) There is another Sean White that bounced around the Majors for a few> years with the Rockies and Mariners. Any relation?
There is no relation, but I've heard about him, I'm pretty sure he's also a lefty (editor's note: he's not, but that means our Sean White is automatically the best LHP Sean White there is!). Between him and the snowboarder Shaun White it makes it pretty difficult to find out information about me via Google or any search engine (another note: yes, it is very difficult...but at least when he Googles his name, he doesn't first come across the page of a Canadian country singer).

10) Dickinson is not a powerhouse for developing pro athletes. When you entered school, did you expect to progress into an all-conference pitcher?
I chose Dickinson because it is very strong academically, which was a priority, and with the program I knew I could be an impact player as a freshman. I didn't have interest in going to a school where I would be in the bullpen for a couple years before starting. I wanted to be able to make a difference from the start.

11) Are any of your buddies from growing up or college playing pro baseball now? If so, have you used what you've heard from them to prepare for professional baseball?
Two of my high school teammates are pitching in the Minor Leagues currently. Chris Dwyer, LHP (drafted 4th round from Clemson) to the KC Royals, hes now pitching in AA for Northwest Arkansas Naturals. Secondly my high school shortstop Anthony Hewitt was drafted in the 1st round (in 2008) to the Philadelphia Phillies and hes now in high A. I took a ton away from Chris from high school. Its hard not to look up to someone who threw in the low 90's on your high school team. His work ethic was unparalleled and he loves the game. I've seen how hard it is to be a successful player at the next level.

12) Who has been your biggest baseball influence in your life?
My high school pitching coach Duane Estes was a no-nonsense coach, he really helped me grow so much as a pitcher from work ethic to locating to thinking like a pitcher. My mechanics improved a ton under him and I still don't think he's had any major arm injuries since he started coaching. I have taken so much from Salisbury to Dickinson and still use much of the knowledge he has given me.

13) Baseball seems to be one of the most difficult sports to play in college, due to the large number of games you have to play both home and away. Is it particularly difficult to keep up with your schoolwork and social life during the season?
Its funny, I've actually noticed that I do better academically in the spring during the season. I think its because you know you have to buckle down and work hard and because you are already in a much more focused and driven mindset from participating in a college sport. As far as social life, most of my closest friends are on the team so we know we are all in it together and have the same agendas.


14) You've struck out 21 batters in a game (1 away from the D3record) and thrown a no-hitter. Which do you think was a bigger accomplishment?
Its funny because both games were completely different. My no-hitter which I also had 17 strikeouts was against a less talented team, but we were forced into extra innings because of me. I balked in the tying run at one point, which was a pretty bonehead mistake. My concern was winning that game and the no-hitter absolutely took the back seat to that. The 21 strikeout game we dominated the game so there was never much pressure to bear down, I was able to be loose and relaxed all 9 innings. Its hard for me to put them in order, but the 21 strikeout game would be bigger because it was against a conference team.


15) Is it comforting to see good Major League players from smaller and less well-known colleges (like Jordan Zimmermann of the Nationals) make it to the major leagues and succeed?
It is comforting because it allows you to know that it isn't impossible to make a step to the next level from playing D-3 baseball. We see a player drafted from our conference typically every year which is reassuring. I have enough faith in my ability where I don't doubt the possibility of being successful in baseball after college if
given the opportunity.


Big thanks to Sean for the interview and to Sunnie for passing his name along to me! Given Sean's good peripheral stats, good attitude and hatred of Chase Utley, I think he'd be a perfect fit in the 2012 Nationals Draft class.
Posted by Unknown at 1:43 PM