Where else to find Sean

5 things to know about Tyler Moore

As you might have seen, 1B/OF prospect Tyler Moore is on his way to Los Angeles the big leagues to make his ML debut, as Mark DeRosa has (mercifully) been sent to the DL. I've historically not been a big fan of Moore as a true prospect, but this is the perfect opportunity to get him some AB's to show what he can do. Here are 5 things to know about Moore before he plays in his first game.

1 - He is an excellent platoon candidate with Adam LaRoche.
Moore, a right-handed hitter, is absolutely annihilating left-handed pitching this season. In 20 plate appearances, he's hitting .421/.450/.789 with 2 HR and 6 RBI. While LaRoche is hitting .389/.450/.611 vs LHP this season, he is a career .249/.306/.436 against them. To get the most value about of Moore (as well as LaRoche), Davey should go with a platoon situation where Moore starts at 1B vs LHP and gets additional playing time with spot starts in the outfield and pinch hitting opportunities.

2 - He has aesome power. Not awesome. Aesome.
Along with Diamondbacks 1B Paul Goldschmidt and Moore are the only players to hit 30+ HR in both 2010 and 2011. Moore's career ISO is .221, which is very impressive. Tyler Moore doesn't have above average tools across the board, but he can definitely hit the crap out of the ball.

3 - His plate discipline is improving slowly.
Plate discipline is the reason I wasn't a huge fan of Moore in the first place. Striking out roughly 4 times per every walk is a recipe for disaster once players start facing pitchers at the MLB level who attack weaknesses. While it is a very small sample size, Moore has walked 10 times in his first 22 games in AAA against 20 strikeouts, improving his BB% from a previous career high of 8.4% (and 5.3% last year) up to 11% this season. He's striking out at his normal high rate, but the higher walk rate makes it tolerable. There is a huge difference between the value of a .270/.310/.500 hitter and a .270/.340/.500 hitter.

4 - He's a better fielder than you might expect.
Moore is not just a right-handed Adam Dunn. While his range in the outfield leaves something to be desired, he's a sure-handed 1B who won't kill you in the outfield.

MASN's Byron Kerr in March talked to Nationals outfield coordinator Tony Tarasco:
"I don't expect Tyler Moore to wow you (in the outfield), but I do expect Tyler Moore to make the routine plays. And with his baseball intellect, he is the type guy who will throw the ball to the right base. He is going to make sure he doesn't miss cutoff men, the little pet peeves that haunt baseball teams (if those plays aren't made) during the season when they are trying to win baseball games."

5 - He is a polarizing player.
He's not just a right-handed Adam Dunn, but do you remember how polarizing Adam Dunn was? Not everybody loves guys that strike out a lot, even if they hit a ton of home runs. As I said before, I haven't been a big fan of Moore due to his poor walk rate. If his early 2012 improvement in plate discipline drops back to his 2011 (or even 2012 spring training, where he found a way to have a .296 batting average and .286 OBP and no, that's not a typo), he's basically a 1 tool player. That tool is aesome, but the rest leaves something to be desired, and he'll always have detractors. 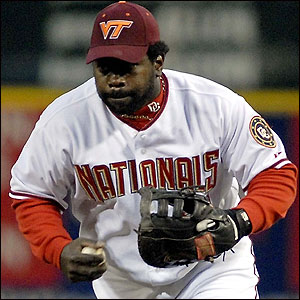 5 years ago today, the Nationals beat the Braves 5-1 to "improve" to 4-9 on the season. Was it a particularly memorable game? To most, probably not. It was a nice game, sure; the Nats got 5 runs and 9 hits out of their top 4 batters in the lineup (Felipe Lopez, Ronnie Belliard, Ryan Zimmerman and Dmitri Young) and Matt Chico pitched 5 innings of 1 run ball (with a spectacular 5 BB/0 K ratio). To me, though, this game was an escape from what had become the worst day of my life.

5 years ago today, my favorite place in the entire world was violated by a student named Sueng-Hui Cho. My oldest sister was a senior at Virginia Tech at the time (thankfully she was not harmed). My grandparents live about 20 minutes away from Blacksburg. My parents met at the school. I had sent in my deposit about 4 months prior and was ecstatic about joining the incoming class of 2011.

It was surreal at the time; obviously, a mass shooting is something that you would never expect to happen at the place that makes you feel happy and safe at the same time. Nobody deserves to lose a loved one in a tragedy, but could this really be happening to us? And even after watching all of the news coverage, it still didn't feel real. Then we got the call, and all I can remember is hearing from my sister, "Leslie is gone." 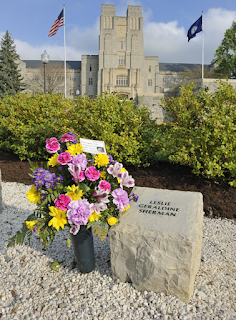 Leslie Sherman was loved by everyone who knew her. In just over 20 years on Earth, she made more people laugh and smile than I think anyone else could do in 100. There isn't one word that could really describe her; nice, outgoing, friendly and spunky could all fit, but they don't do her justice. Leslie was well on her way to changing the world when her life was taken, but to be honest, she changed the hearts of so many others that the world really is a better place because of her.

Tragedies do not only have change the lives of those who lost loved ones. Please take some time, read about Leslie and let her story inspire you to be a better person.

We are sad today, and we will be sad for quite a while. We are not moving on, we are embracing our mourning.

We are strong enough to stand tall tearlessly, we are brave enough to bend to cry, and we are sad enough to know that we must laugh again.

We do not understand this tragedy. We know we did nothing to deserve it, but neither does a child in Africa dying of AIDS, neither do the invisible children walking the night away to avoid being captured by the rogue army, neither does the baby elephant watching his community being devastated for ivory, neither does the Mexican child looking for fresh water, neither does the Appalachian infant killed in the middle of the night in his crib in the home his father built with his own hands being run over by a boulder because the land was destabilized. No one deserves a tragedy.

The Hokie Nation embraces our own and reaches out with open heart and hands to those who offer their hearts and minds. We are strong, and brave, and innocent, and unafraid. We are better than we think and not quite what we want to be. We are alive to the imaginations and the possibilities. We will continue to invent the future through our blood and tears and through all our sadness.

Before I say anything else: SMALL SAMPLE SIZE. Stats from the first 5-7 games of the season are not statistically significant enough to draw any conclusions. I will use them to hopelessly buy in to the encouraging trends some players are showing and at the same time dismiss discouraging trends due to small sample size.

Tyler Moore - Gotta give a guy I'm not as high on as most credit. Moore has only struck out 3 times in his first 6 games 21 at bats and has walked 3 times as well. Coming from a guy that generally strikes out an average of once per game and walks about once every four, I'm pleased to start the year.

Zach Duke - Had a similar start to Maya, except with 1 run and 1 BB allowed. Duke will always be somewhat overrated because of his awesome 2005 rookie half-season, but is still a useful ML pitcher, and I would be surprised not to see him at some point this year.
Jeff Kobernus - Everything is fueled by an astronomic BABIP, but a .406/.424/.469 first week with 5/6 SB and 6 runs deserves a mention.

Jason Martinson - Already has 10 BB and 10 K through 7 games. 13 runs, 2 HR and a perfect 6/6 on SB attempts make him stick out compared to the others in the organization.

David Freitas - He's thought to be a below average defensive catcher, so his bat needs to carry him to the big leagues. At this rate, he's in good shape; David is hitting .467/.500/.733 so far this year.

Doing better than you think:
Bryce Harper - He's still like 14 years old and playing in AAA. .261/.320/.391 is okay for now. He still needs more minor league time, though. I am a part of a very small minority it seems that thinks Harper should be called up no earlier than August. His bat is likely going to face a significant adjustment when he hits the bigs for the first time, and it's probably not going to help the team all that much. So why burn future money to see a future star disappoint when you can save the hype train for a rainy day (like, say, when Strasburg gets shut down for the year).

Not looking so good:
Jason Michaels - 1 for his first 13. His days of being a borderline ML roster player are behind him, but I'm sure he'll be a solid veteran presence in Syracuse.

Rafael Martin - Another of my personal favorites, at least until he gave up 5 runs in 2/3 of an inning on Sunday.

The rotation behind Maya and Duke - Woof. Tanner Roark got busted up in his second outing and wasn't spectacular in his first, either. Mitch Atkins found a way to allow 4 hits and 5 walks in 5 innings with only 1 unearned run allowed to show for it, but he probably won't get that lucky again. John Lannan got bombed, as we all know by now.
Harrisburg's plate discipline - No batter has more than 2 walks, and none of the prospect types (Kobernus, Perez, Hood) have more than 1. If you have poor plate discipline, you will get eaten alive by better pitching. These guys need to develop it at lower levels so when they get to AAA or the bigs, the holes in their swings won't be taken advantage of in every at bat.